The Best Laser Sights for AR-15

You hear it all the time in forums…”what’s the best (insert accessory here) for my AR-15?”. Well here’s the thing: there’s so many great options out there that it’s hard to pick just one accessory for AR rifles that is “the best”. In this post, we’ll go over some of the top laser sights for the AR-15 rifle platform and the reasons behind our top picks.

Jump to our top picks by clicking here. 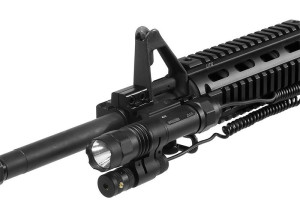 What’s Important in a Laser Sight for an AR-15?

Before we go any further, let’s go over some of the most important things about a suitable laser for your awesome AR rifle. Here’s what we think deserves your consideration:

First, you need a reliable laser, that’s a given. You don’t want the laser sight going out on you at the worst possible moment, even if it’s just at the range.

Second is battery life. Green lasers typically use a bit more juice than red lasers so that’s something to consider. Otherwise, most lasers will last about the same length of time on a battery.

Brightness of the laser is very important. Green laser sights for AR style rifles will generally be easier to see than red lasers. This is especially apparent when using a laser in daylight conditions.

Color of the Laser

Now if you’re using something like an Eotech holographic sight, the dot color doesn’t really matter other than your personal preference since it’s so close. However, for a laser sight that projects a dot at your target, it definitely can make a difference.

Color isn’t that important but then again, you will see green lasers easier than red lasers. If you’re going to do most of your shooting at a dimly lit range, than it becomes a matter of personal preference.

Weight is very important because you don’t want to have a laser sight weighing down a rifle that you built to be lightweight. You also don’t want a heavy and bulky laser getting in your way when you place your hand on the gun.

Our Top Picks for The Best AR-15 Laser Sights

We based our picks on product reviews across the web, functionality, brightness, reliability, build-quality and weight. Our choices below reflect the absolute best laser sights available for the AR-15 on the market today.

There’s no doubt that Crimson Trace makes top of the line laser sights that are durable and proven to work every time. One of their newest creations for the AR platform is called LiNQ. It comes with a grip and is instinctively activated, similar to other Crimson Trace pistol lasers that we love (see an example on our post about the best laser sights for Glock).

The LiNQ is flat out awesome. You grab the grip and the laser turns on. That alone is worth the money. It isn’t cheap but it sure is worth every penny considering that this laser sight can save your life.

There are some other awesome features included in this laser that make it perfect for your AR. One feature is that it also features a super-bright 300 lumen tactical light with multiple modes including strobe. Another awesome feature is that the laser is green (very important, especially in daylight). There’s also an industry-leading 3 year warranty and Crimson Trace will replace the batteries for free for life.

We’re talking about a very high-quality, high-tech AR laser that is military-grade. If you’re serious about home defense or if you want the best by far then you’ll think about getting the Crimson Trace LiNQ.

The newer and better model of our highly-touted TLR-4, the Streamlight TLR-2 combines a high-lumen tactical flashlight with a super-bright red laser. These laser sights by Streamlight are built like tanks and built to last on your AR-15.

This light/laser combo has everything you need, to see in the dark. The Streamlight TLR-2 will mount to long guns as well as handguns without having to use any tools to secure it to your weapon of choice. This is great for those with little to no tools (Or patience). The green laser will help you get on target quickly and accurately, while maintaining a long battery life for your mission. A strobe setting and ambidextrous option for on/off switch allows for ease of functionality. This laser/ light combo is definitely not on the lower end of what you’ll be spending but like they say “You get what you pay for.”

Ozark Armament makes some pretty cool stuff, like flashlights, optics and more but their laser light systems have to be the coolest! The tactical green light laser system comes equipped with a picatinny rail mount so you can attach it to the rails on your AR. Very lightweight and made of aluminum, you’ll be able to whip around corners with ease.

The 532nm 5mw green laser system can be seen for up to a mile with its powerful beams. If you want to light up a place, this would be a good choice for doing just that! With a very reasonable price point (Sub $50) you have no excuses to not add this excellent laser to your arsenal!

Comes with momentary switch and we’ve got to admit that it is a very well built tactical green laser sight for your AR-15 or AR-10 rifle. What’s most impressive is the quality of laser that you’re getting for your money.

While the aforementioned TLR-2 is a better overall package, those looking for a simple green laser sight should not be passing up this deal.

Although green lasers are said to be more powerful and better for many situations, red lasers have some advantages (Lower cost and less drain on the battery) like this TLR-4 that features a powerful red laser in an incredibly lightweight package. The light that is attached is a great addition in combination with the red beam. With a three mode option you can switch on the laser only, LED light or both for maximum brightness.

A Class IIIR rating and 5mW power output means this product is safe to handle if done properly. That doesn’t mean you should be irresponsible because it is still a very powerful laser! With its compact size and weight, you can snap this laser/flashlight combo onto many different firearm types including handguns and your AR-15. It’s a mid-range priced laser/light but its super small and light weight design is worth coughing over those extra dollars! Check out our full review of the TLR-4 here.

For the money, the TLR-4 definitely kicks butt, however it’s big brother TLR-8 laser light combo is a little bit better if you want to save space on your rail and combine a very powerful light with a high-quality laser beam. We’re kind of getting out of budget AR laser territory with this one but it’s worth it.

A reputable name in weapon mounted technology, Viridian prides itself on innovation in the firearm accessories industry. Let’s talk about their super cool laser systems of which include the super bright X5L laser and Tac light. An amazing feature that this laser/Tac light possesses is its instant-On activation.

As soon as it’s drawn from the holster, it activates preventing fumbling around for an on switch. This is an extremely neat benefit when addition to the fact that this green laser is visible for a distance up to two whole miles (That’s pretty dang far)! You’ll have 6+ hours of constant laser operation and with its ease of mount ability this makes for a hassle free laser system. You won’t feel guilty for dishing out the extra money for this fairly priced laser as Viridian is trusted and used by many and for many different purposes.

For less than $50, you get one hell of a laser and flashlight combo for your AR-15. The WNOSH laser sight is the perfect size and weight for my Colt AR. I really like the brightness of the green laser and it’s surprisingly bright for the money. Overall, I have to recommend the WNOSH as the overall best laser sight for your AR-15 for the money. Check out the reviews and customer photos by clicking here.

Comes with a momentary pressure switch, holds zero on .223 rounds and is low profile so you don’t add extra weight to your AR. For around $100, this is one heck of a AR laser sight for your money. It also comes in a flat dark earth variety in addition to the black.

If you’ve read our post on laser boresighters, you’ll know that SightMark is a very good brand for AR lasers.

You’ve worked so hard to keep the weight down on your AR-15 but you want more cool stuff! Well this little laser has all the power you need in a compact package. We reviewed the Micro-Tac for it’s applications as a pistol laser in the past but it can also serve as an ultra-compact tactical laser on your AR. It’s available in both red and green for under $100.