Keymod vs. M-Lok – Which Handguard is Best?

When you enter the world of DIY gun building and modification, it can be overwhelming. It will often lead to more questions answered with opinion rather than fact. There is no exception when it comes to Keymod vs. M-Lok handguard systems for the AR-15. 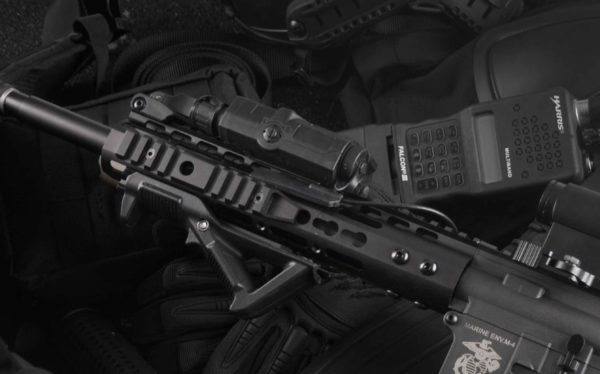 So you’re in the process of building your first AR-15 or simply looking to upgrade from the infamous ‘cheese grate’ picatinny quad rail but don’t know what to choose. Don’t worry. You have come to the right place.

Below you’ll find an unbiased review of the M-lok and Keymod handguard, practical uses for both, and finally, the results of a stress test conducted by the United States Special Operations Command (USSOCOM).

The History of Keymod Handguards

The Keymod handguard was designed and released to the public in a joint effort between VLTOR Weapon Systems and Noveske Rifleworks.

In early 2008, Eric Kincel, a former employee of VLTOR, wanted to create a more modern and streamlined handguard. Kincel’s first goal was to design a rail that still accepted a variety of attachments while removing the Picatinny rails positioned at 3, 6, and 9 o’clock. This helped mitigate bulkiness, reduced the weight, and increased heat dissipation. Unfortunately, this was still just a fleeting idea until the USMC submitted a request to VLTOR for an upper receiver.

The United States Marine Corps needed an upper receiver that worked with the M16A4 barrel cluster to improve accuracy while reducing weight. VLOTR immediately took up the challenge and placed the newfound project into the hands of none other than Eric Kincel. This finally led to the development of the VIS A5 KM.

Around this time, Noveske Rifleworks stepped into the picture. Kincel reached out to John Noveske, founder of Noveske Rifleworks, and relayed the VIS A5 KM design information he’d been working on for the USMC. Noveske jumped on board and began designing the NSR Keymod handguard.

With VLTOR and Noveske both working in collaboration on this design, the revolutionary handguard known as the Modular Key (Keymod) was born. Shortly after, this handguard design became readily accessible to the public when VLOTR released it for open source development.

Soon, the whole world began to create their own keymod handguards, accessories, and adaptors.

Keymod handguard rails are known for being extremely lightweight with a plethora of cutouts ensuring ample space for ventilation and heat dissipation.

Attaching accessories to the Keymod is incredibly simple. You place the nut in the large hole on the rail and slide it down into the smaller section. Afterwards, you tighten to the correct spec. It’s just that easy. The self-aligning design of the Keymod ‘key-hole’ ensures that your attachments will stay in the correct position.

Thanks to Kincel and the President of VLTOR, Keymod is open sourced. This means you can get anything and everything from anywhere in the world. Accessories like the well-known Bravo Company’s vertical foregrip are made for it. If you have an attachment you can’t let go of from the older Picatinny quad rail, you’re in luck. Simply slide on a Picatinny rail slot section and your beloved accessory will not go to waste.

Keymod is Cheaper Than M-Lok

Magpul backs M-lok, which has in turn swayed consumers and businesses alike to focus slightly more on M-lok handguards rather than Keymod. This surprisingly helps Keymod with affordability. You’re likely to find the same accessory or handguard in both M-lok and Keymod, but Keymod will be slightly cheaper due to it being less desirable. (This is a double-edged sword. More on that in the next section!).

Slightly Harder to Find Accessories Made For Keymod

Remember how i said earlier that you can practically get anything for Keymod cheaper than M-lok? That’s because the Titan of the industry Magpul backs M-lok. This has swayed a lot of the consumer populace to favor M-lok rather than Keymod. That being said, it is going to be difficult to find certain accessories and rails when shopping for Keymod. Most of the industry’s focus is geared towards supplying what the majority of consumers favor, M-lok.

Shaving weight to reduce the cumbersomeness of a rifle has its setbacks. While the profile of the Keymod handguard is slim and extremely light, the durability took a hit. Hard use over time can cause stress fractures and cracks in the keyhole design.

The History of M-Lok

The origin of the M-lok rail began back in 2007 when Magpul designed the Masada Concept Rifle. Later on, it became known as the Bushmaster adaptive combat rifle (ACR). This rifle had elongated oval cut outs on the handguard where you could attach accessories such as lights, foregrips, or lasers.

Magpul had already heard of rumors floating around about a new rail being designed to replace the Picatinny quad rail and knew they had to get in on the action or be left behind. Before the lightweight aluminum M-lok rail was developed, Magpul designed and released the MOE (Magpul Original Equipment) handguard.

The handguard was made from heat resistant polymer with elongated oval cutouts for attachments. While the choice of material proved to be extremely light, the handguard itself appeared to be larger than necessary and lacked the ability for modularity.

Side note: The MOE handguard is rarely used in comparison to the M-lok and Keymod rails. Adding one of these to your rifle will surely make it stand out from the rest. You can check them out at Opticsplanet.com by clicking here!

After some time, Magpul improved this design. The company opted for an aluminum construction instead of the polymer design of its predecessor. They increased the number of cut-outs for attachments and added a fixed Picatinny rail positioned at 12 o’clock. In 2014, the notorious M-lok rail system was born, along with the unspoken rivalry between Keymod and M-lok.

Unlike VOLTR’s decision to make their Keymod design open source, Magpul made their design free licensed. This was so Magpul could stay in control of the specs associated with M-lok rails.

The M-Lok rail’s cutouts are elongated. This means you have some space to slide attachments forward or backward when attaching them. This may not sound impressive, but take, for example, when mounting a weapon light on your rifle. It could mean the difference between the light casting a shadow off of your gun or not. In extreme cases, it could even mean the difference between gunpowder residue accumulating on the lens and changing that bright white light to a hazy, dim glow.

As mentioned above in the Keymod pro and con section, because M-lok is backed by an industry superpower like Magpul, you will find just about anything and everything compatible with the M-lok system.

The mounting design of the M-lok rail has improved repeatability when mounting precision laser sights for your AR-15. What this means is the device you zeroed is more likely to stay zeroed if you remove it and place it back on your rail.

Attachment installation is a breeze. An Allen key is all you will need. Simply place the accessory with the T shaped nuts running parallel to the cutout through the slot and turn until perpendicular to the cutout. Tighten appropriately and you’re good to go. M-Lok is by FAR the easier handguard to mount accessories and attachments to.

The tip of the T-nut may come into contact with the rifle’s barrel, potentially causing complications for long-distance shooting. This is rare and largely depends on the design of the handguard and the barrel you choose.

Depending on how thin your M-lok rail is, mounting accessories near your gas block may be difficult. This is again, due to the length and design of the T-nut. You may not have enough clearance and it could potentially come into contact with your gas block.

If you’re still not sold on one or the other, this comparison of the two conducted by the Naval Sea System Command (NAVSEA) and sponsored by the United States Special Operations Command (USSOCOM) might be the tie breaker. The objective of the test was to help the USSOCOM determine which handguard best met their standards for operational use.

To help save you some time on reading, I will cut straight to the results. The 43-page document can be found  HERE.

Five tests were conducted on three different M-lok and Keymod handguards (Aero Precision, Midwest Industries, and Seekins). The scope of the tests revolved around determining which handguard ranked superior in repeatability, drop testing, rough handling, endurance, and failure to load.

Results: M-lok outperformed Keymod on 3 of the 5 tests

Is M-Lok Better Than Keymod? The Results Explained

So, does this make M-lok superior to Keymod? I don’t believe it does. There are many things to consider when looking at this data. For instance, most of us are not going to run either handguard at the extent an operator would. Similar to rifle length, handguards can be mission specific. There is no one ‘shoe fits all’ kind of thing here. If your range time primarily consists of shooting on a flat and static range for a few hours, Keymod will work just as fine.

That being said, the best route to take would be to find the handguard you favor most. Get out and train with it. After some time, transition over and use the opposing handguard. Once you get ample experience with both, you will be able to decide on what fits your mission-specific needs most!